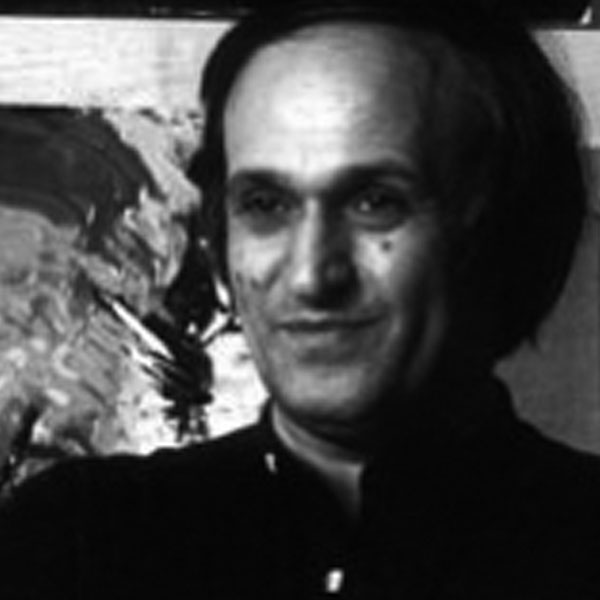 Mario Schifano is born in Libya (Homs) in 1934. Following the end of the Second World War, Mario Schifano moves to Rome. Showing little interest in school, he soon begins restoring ceramics, a trade learned from his archaeologist and restorer father. He draws planimetries of graves for Etruscan Museum in Valle Giulia. In the meanwhile he starts painting because it is his great propensity. He exhibits for the first time in 1959 at Appia Antica Gallery in Rome characterized by informal culture with canvas of high materico thickness. In 1960, for the exhibition at the Galleria La Salita, where also Angeli, Festa, Lo Savio and Unicini expose, the critics starts taking an interest in his work. This interest lasts more than ten years and the artist receives two prizes as Lissone Award (1961) and Fiorino Award, The new figuration (Florence 1963). He begins a series of monochrome paintings, in which the surface becomes a “screen”, the starting point and the place where he is going to insert marks, numbers, letters, street signs, new pictures produced artificially by industrial civilization. He exhibits in many galleries and takes part to many public and private expositions in Italy (Rome, La Tartaruga, 1961; National Modern Art Gallery 1966 and Attico Gallery, 1967; Milan, L’Ariete Gallery 1963 and Marconi Studio, 1965; XXXII Biennial of Venice, 1964; V Biennial of San Marino, Oltre l’informale, 1963 and VI Biennial, 1965) and abroad (New York, Sidney Janis Gallery, The New Realists, 1962; Paris, Sonnabend, 1963; Pittsburgh, Carnegie Institute, 1964; Biennial, Sao Paulo Brazil, 1965; Tokyo, National Museum of Modern Art, 1967). These expositions mark his activity in a decade where he goes many times to America (1962-63-64). Here he knows Pop Art, Kline and Dine. He works by topic phases and in these years he creates some anemic landscapes where the natural aspect is described by a reproduction of a precedent picture recalled through allusions, particular signs and fragments. It is a reproduction because it is not a direct lived experience. Later, Schifano works on many works dedicated to Futurism where the picture is taken by mass-media, the figures are simple profiles recalled under panels coloured by Perspex. In the mid-seventies Schifano combines the attention to technology with reproduction of pictures, reflective dimension to the city, the music, the advertisement, and the photography mixed with cinema and its experimentations. He realizes a full-length movie (Anna Carini seen by butterflies in August, Marconi Studio, 1967) and a trilogy of movies Satellite, Human and Inhuman, Transplantation, consumption and death of Franco Brocani. In the Seventies and Eighties he works on artistic subject and artists using pictures of some historical icons ad De Chirico, Henri Matisse, Leonardo da Vinci, Paul Cèzanne and futurists. This tendency derives from his Futurism revisited (1966), its title is traced on the famous picture of futurists showed in Paris in 1912. Later, he dedicates an exhibition to his auxiliary Muse (the television) with paintings and pictures retouched by hand. They are exhibited in Brazil Fundacao Memorial da Latina America, 1996) Buenos Aires (Museo Nacional de Bellas Artes, 1997), all’Avana (Wilfredo Lam Foundation, 1998), Mexico City (Museo de Arte Carillo Gil, 1998). In addition, he is present in many Italian expositions (Rome, Soligo Studio , 1970, Exposition Palace, X Quadriennial; Villa Borghese Parking, Contemporanea, 1973, directed by Achille Bonito Oliva; Parma, La Steccata, 1973 eUniversity, 1974; Napoli, Lia Rumma, 1973; Bologna, National Modern Art Gallery , 1976; Venice, XXXVIII Biennial, 1978; Ferrara, Palazzo dei Diamanti, 1979). This production continues but slowly because of his existential crisis. After this troubled years, Schifano proposes some works influenced by great artists of historical avantguardes as Magritte, De Chirico, Boccioni, Cézanne but these works reproduces also his style of seventies. The artist comes back to particular instruments (for example the gestures) that are typical of the painting and the drawing. The only substance is the colour that gives the chromatic pleasure on two-dimensional surface of painting. In 1997 he receives San Giorgio Donatello Award for polychrome glass windows in Santa Croce (Florence) on occasion of seventh centenary of its construction. He dies on 26th January 1998 at hospital in Rome because of his many excesses and recklessness. After two years the Biennial of Venice pays tribute to him.